I'm a Scientist: Supported by Wellcome and UKRI
Skip to content 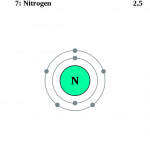 At this very moment you are surrounded by nitrogen – it makes up almost eighty percent of the air! Fortunately nitrogen gas is colourless, odourless, hardly ever reacts with anything and isn’t harmful to humans. In fact nitrogen (when joined with various other elements) is absolutely vital to life on earth. 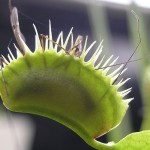 Nitrogen is part of the stuff that makes up life – proteins. Animals get hold of it by eating other organisms and stealing their nitrogen molecules. Plants usually absorb it from the soil but in some places the soil just doesn’t have enough nitrogen in it. This is why some plants decide to become carnivores instead – like Venus Fly Traps who get their nitrogen from eating insects!

Although some nitrogen gets into the soil naturally, plants almost always need more. Farmers help with this by adding nitrogen fertilisers to their fields. These fertilisers are made by the Haber process, which turns unreactive nitrogen in the air into 100 million tons of nitrogen fertiliser each year. If German chemist Fritz Haber hadn’t worked out how to turn atmospheric nitrogen into fertiliser, then the earth would only be able to produce about 2/3rds of the plant food it does now. This means that about a third of the human population wouldn’t be alive if it wasn’t for the Haber process!

When nitrogen isn’t busy keeping us alive, it’s trying to kill us. Nitrogen on its own is dull and won’t really do anything. BUT, mixed in with certain other elements it suddenly becomes one of the most explosive substances around! The very first gunpowder (used for destroying your enemies and/or celebratory fireworks) was made with a compound called Potassium Nitrate. When this stuff didn’t occur naturally people would make it using things like dung heaps or smelly bat guano. It turns out urine can be explosive stuff. Even today all the best explosions are fuelled by nitrogen – things like nitro-glycerine, nitrocellulose and TNT (trinitrotoluene)! 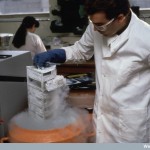 Pure nitrogen isn’t always boring though. In fact when you make it so cold that it condenses into a liquid it becomes really useful. You have to get it down to -195.6°C before it actually becomes a liquid, but it’s then great for keeping other stuff cold. Things like blood that scientists need to preserve, or sperm and egg cells, or even giant X-ray detectors that tend to overheat. As well as being really cool, it also looks really cool (cue groans) when you pour it onto water as you can see at the end of this video: http://www.youtube.com/watch?v=MaxZwsqstFs